There must be 6,000 books in our Constitution Street home, and they’re overflowing the shelves like they’re multiplying on their own. They represent the cultural life of a couple of individuals who immersed themselves separately from an early age in literature and ultimately came together as a couple in an explosion of books. Many bookcases around the house don’t provide enough shelf space to hold them all, so headlines pile up on the kitchen table, around beds, and cover just about any space. dish available. There is no system to madness other than what was most recently at hand, what was most recently needed for research, what was the most recent object of our curiosity.

Let me make a correction.

There is no system to my literary madness. I am the one who piles books like dominoes of knowledge around the spaces where I eat, sleep and work. Kim has subject matter libraries, carefully thought out and kept in her own idiosyncratic library. There are libraries devoted to popular culture, the Vietnam War, world religions. The biography, for example, covers Henry Adams and Bruce Springsteen and Laura Ingalls Wilder. There is a separate section for the object of his fascination and political loathing, Richard Nixon. Oh, I’ve grouped some topics together – Mark Twain’s studies, for example, or Fortean’s topics – but overall my books tend to look like the order I read them.

Another difference is that while I have always had an aversion to writing in books, viewing it as something akin to vandalism (although I present them from across the room at times), Kim scribbles margins as she reads. In one book, for example, she wrote in ink: â€œAs much a biography of a relationship as of a person, Fraser finally clarifies the status and authenticity of ‘Little House’. books novels.”

We’ve also read most of the books in our collection, and those we haven’t read are on the waiting list. Being from Kansan, my reading since childhood has been strongly oriented towards books that have a link with my country of origin. Because we are approaching Kansas Day (January 29), it seems appropriate to offer a list of titles on the Sunflower State. Call it 10 Books Every Kansan Should Read.

There are other Kansas book lists, including a Readers’ Choice compiled in 2011 by the State Library for the state’s 150th anniversary. A â€œKansas Literature Mapâ€ was compiled by students in Thomas Fox Averill’s course at Washburn University. But my list is based on my own reading, and it represents what I think others should understand about Kansas, and what the Kansans should understand about ourselves. Because I have limited the list to 10 works, I am leaving out many expected titles and some deserving titles. You won’t find L. Frank Baum here. But this is my list; you can salt your own list to taste.

This autobiography by Gordon Parks, first published in 1966, offers a seamless account of his childhood in poverty with a black Kansas family. The first line of the first chapter is haunting: â€œThe full meaning of my mother’s death had settled in me before they brought her down to the grave. Parks would leave Kansas in 1928, at the age of 16, when his large family in Fort Scott went their separate ways after his mother’s funeral, but Kansas – the austere and beautiful landscapes, and the austere and brutal racism – would stay with him for life. Parks would soon take a camera, his weapon of choice, rather than a pistol or a knife, as he had seen others turn to. As a photojournalist he will photograph for the Farm Security Administration and Life magazine and fight racism with his talent. As a filmmaker, he directed “Shaft” from 1971, which gave American cinema a new genre. But it’s his interpretations of the Kansas he knew, in his autobiographies and the novel (and later the movie) “The Learning Tree,” that give us the best understanding of Parks and the state he grew up in. 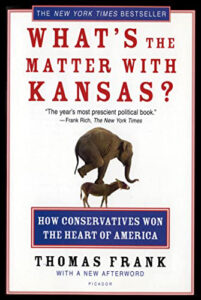 In 2004, Thomas Frank gave us a glimpse of the future. Captioned â€œHow the Conservatives Winning America’s Heart,â€ Frank says American policy is how people get it wrong about their core interests. It’s a kind of inconvenience, and this inconvenience impoverishes the working class people of the Great Plains while fueling financial interests that should be the natural enemy of blue collar workers. A native of Kansan, Frank did not spare his criticisms of the conservatives. But he hasn’t seen everything. The book looks almost quaint now because it’s not about identity politics. He didn’t predict Trump. In his 2016 book, â€œListen, Liberal,â€ Frank also turns against the Democrats, claiming that the People’s Party has now abandoned them. 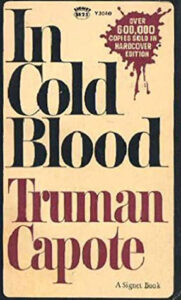 This 1966 account of the murder of the Clutter family in Holcomb became a national sensation and gave us the book of “the real crime” as we know it today. It also spawned several films, based on the book itself and its author, Truman Capote. Capote was a New York novelist and writer who came to Kansas with his friend, Harper Lee, to do field research into the murder in the heart of the country. He blurred some facts and may have intentionally manipulated the emotions of at least one of the killers, who were executed by hanging in Lansing State Prison. Despite its journalistic flaws, the “non-fiction novel” mirrors the Kansas character, making us take a look at our ideas of community, family, violence and punishment. 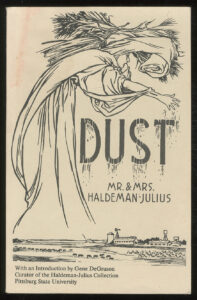 In 1921, the editorial staff of Marcet and Emanuel Haldeman-Julius published a psychological novel about hope and despair in southeastern Kansas. Largely forgotten today, the work was considered a “great” novel in the era of great novels. Marcet Haldeman was the feminist daughter of a wealthy (and conventional Midwestern) Girard family. Emanual Julius was descended from Jewish refugees from Russia, and he had come to Girard in 1915 to work on the socialist newspaper â€œThe Appeal to Reasonâ€. Their marriage was remarkable in many ways, but their literary work together was possibly the best. Although Haldeman-Julius is best known for Little Blue Books, the first mass-market paperbacks, “Dust” captures a time when survival was inextricably linked with the earth. 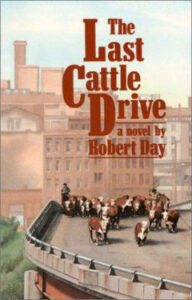 Any Kansas book list must include a western, and this original tale, published in 1977, is hard to beat. My apologies to all my friends who write westerns. Robert Day’s novel was a bestseller and a Book-of-the-month Club pick and strangely affected by its humor and affection for its characters. The premise is that a cantankerous former rancher assembles a group of misfits to drive 250 head of cattle from a ranch near Hays to present-day Kansas City. Along the way, they pass iconic Kansas landmarks, including Lucas’s Garden of Eden. â€œI had never been to a place where time had so much to do with the lives of the people who worked,â€ says the narrator, who comes here to teach at the school. 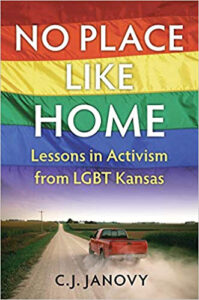 Captioned â€œLessons in Activism from LGBT Kansas,â€ this 2018 track by CJ Janovy gives us a basic truth about the struggle for civil rights for a community that finds itself in particularly hostile territory. If you are a Kansan, you will probably recognize some of the scenes described by Janovy, such as the Rainbow House opposite Westboro Baptist Church in Topeka. It’s an important book on a serious subject, and Janovy is very careful with his reporting. But beyond his talents as a journalist, Janovy’s infallible sense of decency and compassion makes this book shine. You will feel better after reading it. Also, I should note that Janovy is a friend of mine and a former Reflector opinion writer. But this is my list, and I can choose.

7. “The Last Wild Places in Kansas” 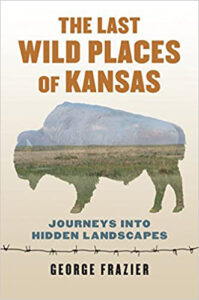 OK, another book from a friend. But this one too deserves to be on any Kansas book list. Released in 2016, this book is the closest Sunflower State has to “Walden.” It’s a meditation on all that is wild and a tireless exploration by author George Frazier of those places that we know must exist, but few of us seek out. Frazier, a software engineer from Johnson County, has spent three years exploring the hidden corners of the state. Here’s a taste of what Frazier has to offer: â€œWhether or not it fits our national character,â€ he writes, â€œmuch of American history is gathered in the grass, haphazardly strewn behind many. old barns and in fields, hidden in undiscovered archaeological sites and in ghost towns, and sheltered in the small wilderness that still remains. 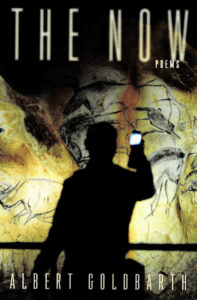 Albert Goldbarth writes poetry for those of us who don’t care. He is the only poet to have won the National Book Critics Circle Award twice, and this 2019 collection proves once again that what he writes matters. I don’t know anything about poetry, but I know that when I read Goldbarth, I hear music. My favorite from the collection? “GO”, maybe for that one sentence: “the scree creepy sexthrill”. And a line in another poem where he notes that 34 seconds after the title credits start in “Cheyenne Autumn,” a western set in 1878, you can see jet trails in the sky. Did I mention Goldbarth lives in Wichita? 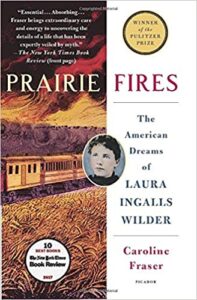 This 2017 Caroline Fraser historical biography traces Wilder’s life from the Indian War to the Dust Bowl, and thus reveals the author who gave us the books “La Petite Maison dans la Prairie”.

One of the earliest memories of his subject, Fraser says, was “peering through the keyhole opening in the arched canvas covering of his family’s wagon” as they walked through the prairie from Missouri to Kansas. The book deals with the national mythology of self-reliance and won the Pulitzer Prize. 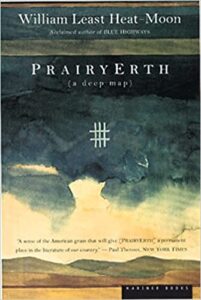 William Least-Heat Moon has spent a lot of time surveying Chase County and talking to the locals, and the result is this book published in 1991, which he called a “deep map.” I had this book on this list, and off, several times, and finally realized that it wasn’t because I didn’t think it was worth reading, but because I think the spelling of the title is unduly valuable. But that’s about the only thing I can object to in the 634 pages of the book. â€œFor years, aliens have regarded this prairie as barren,â€ writes Least-Heat Moon, â€œa land of nothing more than any other place you could name, but I know I’m not here to explore emptiness in the heart of America. I’m only looking for what Is here in the Flint Hills of Kansas. He came to find the shadows and the light, and the result is Kansas chiaroscuro.

Other titles, such as “Flint Hills Cowboys” by Jim Hoy or “The WPA Guide to 1930s Kansas” by Jim Hoy are also deserving. But I have to keep some titles to write in the future. “The Wizard of Oz” will probably never make my lists, unless it’s a movie listing.

Do you have your own favorites? Create your own top 10 and share it. That’s the great thing about books: the more we read, talk about, or even throw them across the room, the more we participate in a shared literary culture.